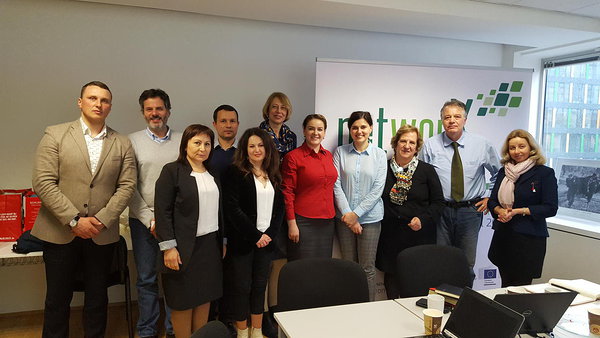 On March 14, an information session on the achievements and perspectives of LEADER in Moldova was held in Brussels, in the premises of the European Network for Rural Development. This important meeting brought together, representatives of the National LEADER Network in the Republic of Moldova, the Ministry of Agriculture, Regional Development and Environment, Moldovan LAGs and LEADER facilitator organisations, as well as representatives of ELARD and PREPARE – Partnership for Rural Europe.

After a set of three small panels on subjects related to LEADER in Moldova – Introduction & presentation of the National LEADER Network; Rural networking – ELARD & PREPARE & NRDN Moldova; and Moldovan LEADER experience and examples, there was an open discussion between the participants, sealed by the closing remarks.

ELARD, PREPARE and National LEADER Network in the Republic of Moldova were respectively represented by Maria João Botelho, Urszula Budzich-Tabor and Marina Albu. It is interesting to note that the moderator of the discussions, Panagiotis Patras, an expert in Rural Development from ENPARD–European Neighbourhood Programme for Agriculture and Rural Development Technical Assistance to the Ministry of Agriculture, Regional Development and Environment of the Republic of Moldova, is a former president from ELARD, from 2007 to 2010.

In her presentation, Maria João Botelho refered the need for ELARD to make the association more visible on EU level and strengthen and expand the ELARD members network by involving new members, also in neighbour countries. The president of ELARD also congratulated the difficult task of building up the Moldovan LEADER Network. And she added that for ELARD networking is an essential part of LEADER.

The implementation of the LEADER approach in Moldova started in 2015/2016 with the involvement of different partners and with the support of several donors, including the EU. The first moldovan LAGs were launched in 2017/2018 based on a methodology elaborated within the EU-funded SARD Programme. Currently in Moldova there are more than 30 LAGs, covering around 30% of the rural areas. In 2018, 11 LAGs managed local development calls and co-financed circa 160 local development projects with a total co-financing of about 0.5 million EUR. At the end of 2018 Moldovan LAGs and organisations that facilitate implementation of the LEADER approach in the country founded the National LEADER Network to promote LEADER as an effective instrument for rural development and to consolidate and represent Moldovan LAGs.