Community-led Local Development (CLLD) was introduced in the 2014-20 programme period and is based on the well-established LEADER tool. While LEADER is distinctly rural, co-funded by the European Agricultural Fund for Rural Development (EAFRD), CLLD allows Member States to make use of up to four different ESI Funds: EAFRD, the European Maritime and Fisheries Fund (EMFF), the European Regional Development Fund (ERDF) and the European Social Fund (ESF). CLLD can be supported by a single ESI Fund or by any combination of the four Funds. Similar to LEADER, each CLLD unit is led by a LAG, a partnership of local public, private and community representatives responsible for the implementation of CLLD in their areas.

There are 3337 Local Action Groups (LAGs) in the EU (Table 1, updated May 2021 and including 3 discontinued LAGs: 2 in UK and 1 in SK). In 15 Member States there are 727 LAGs using CLLD as an implementation mechanism for parts of their allocation of ERDF funding. The integration of multiple ESI Funds in CLLD was taken up in 16 Member States, but only one quarter of LAGs in these countries integrate multiple ESI Funds.[1]

Table 1: Use of ESI Funds by CLLD LAGs in the EU28 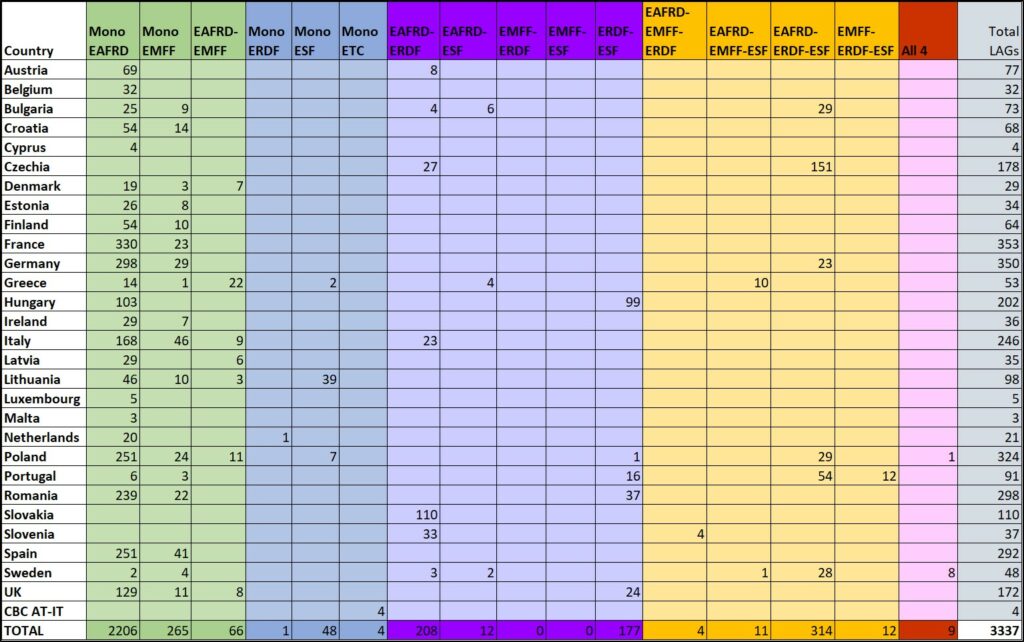 Source: adapted from Servillo L (2019) Tailored polities in the shadow of the state’s hierarchy. The CLLD implementation and a future research agenda, European Planning Studies, 27:4

Table 2 looks specifically at ERDF and how the Fund is combined with others. In most cases, the model combines either EAFRD with both Structural Funds ERDF and ESF (314), or EAFRD with ERDF only (208). Also, using the two Cohesion policy Funds only (177), without any EAFRD or EMFF funding, is an option taken up by many LAGs.

Focusing down on only those LAGs that make use of ERDF funding, Table 3 shows how the ERDF is combined in different Member States. 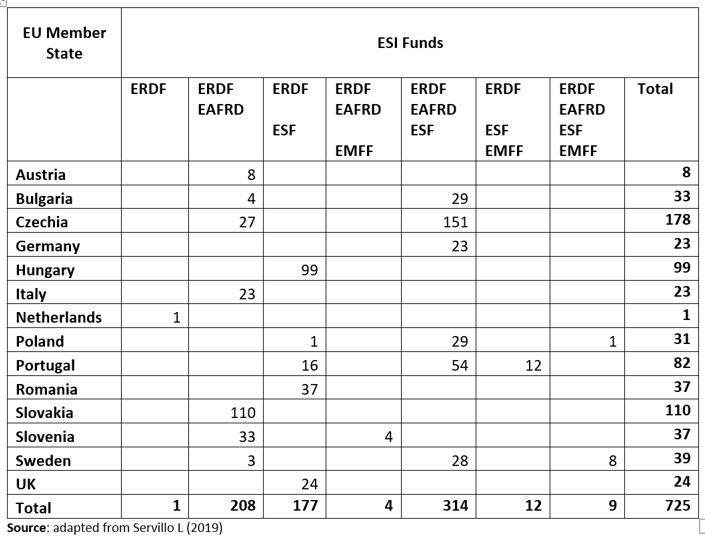 Based on the extent to which they took up the option of using Cohesion policy Funds (ERDF and ESF), the 28 EU Member States can be grouped into 4 types.

No use: 12 countries decided not to make any use at all of the option to use any ESI Funds other than the ones that could already be used in 2007-13. Belgium, Croatia, Cyprus, Estonia, Finland, France, Ireland, Luxembourg, Malta and Spain all only implement CLLD in a traditional mono-Fund way, using either EAFRD or EMFF. Denmark and Latvia combine the latter in a number of LAGs.

Limited use: 5 countries make only limited use of multi-Fund CLLD with ERDF. In the Netherlands there is just one ERDF LAG. In Austria, Germany and Italy there are only a very limited number of federal States or regions that use CLLD as a means to implement ERDF. Lithuania only uses Cohesion policy funding in a mono-Fund way.

Extensive use: 5 countries adopt a multi-Fund approach with Cohesion policy Funds more widely. However, in the UK, it was left to the devolved administrations to choose their approach and only England decided to make use of both ERDF and ESF. In spite of expanding the range of Funds used, Hungary and Romania maintained the separation between EAFRD and EMFF on one side and Cohesion policy Funds (ERDF and ESF) on the other. In both Bulgaria and Poland, traditional mono-EAFRD LAGs continue to play an important role, but there is a considerable number of LAGs adding ERDF and ESF to the rural development funding.

Policy-makers generally acknowledge the benefits of CLLD, but its potential for an increased policy integration appears to be not yet used to its full extent. CLLD can be a useful tool for an increased integration of funding streams, i.e. between different ESI Funds. Indeed, in the Austrian Land of Tyrol, CLLD brought for the first time an integration between EAFRD and ERDF funding. However, for several programme managers, CLLD is deemed to be of limited use for stronger integration, as the traditional silos remain. Governance structures and regulatory frameworks continue to be largely separate at both EU-level and Member State level. In England and Slovenia, for instance, policy-makers felt that it was not possible in practice to integrate the Funds in the same projects. Instead, the fact that LAGs have to deal with two different MAs for EAFRD and ERDF created delays for Slovenian LAGs. Different rules and responsibilities require them to create two separate calls for the two different funding sources.

Policy-makers found some positive, albeit limited effects of multi-Fund CLLD on a better ability to respond to territorial needs. The multi-Fund approach can allow LAGs to respond better to the needs in their areas, as they can cover a broader range of themes by choosing to fund their strategies from up to four different Funds. In Sweden, the multi-Fund set-up has made the local partnerships broader and allowed the LAGs to generate ideas from different fields of interest. Yet, a real bottom-up approach is restricted by the limitations of what can be supported under ESIF rules. The real added value of the bottom-up element would only take effect if there were no limits in terms of intervention areas. Future thematic concentration requirements would need to give more scope for local actors to take into account local needs.

However, main challenges include:

Looking into 2021-27, there are several unresolved issues: 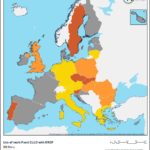 Servillo L (2017) CLLD under ERDF/ESF in the EU: A stock-taking of its implementation. Report to DG REGIO and DG Employment, 4 December 2017.

Servillo L (2019) Tailored polities in the shadow of the state’s hierarchy. The CLLD implementation and a future research agenda, European Planning Studies, 27:4