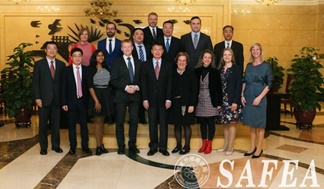 In a statement from the 19th CPC National congress Xi Jinping, President of Public Republic of China, has stressed the importance of rural vitalization. ELARD has, as the first and only international organization, signed a Memorandum of Understanding with the China Association for International Exchange of Personnel.

The MoU was signed in March 2018 and describes the cooperation between the partners which will lead to promoting rural vitalization, poverty alleviation and coordinated development of urban and rural areas.

Mid-october 2018 an ELARD delegation, accompanied by other European partners met with Zhang Jianguo, deputy minister of science and technology and administrator of the State Administration of Foreign Experts Affairs in Beijing. Zhang welcomed Maria João Botelho, ELARD President, Petri Rinne, Head of the Delegation and all the other experts and expressed his appreciation to ELARD for its projects to promote the development of rural areas in Europe. The delegation was encouraged to work on a confrontation of two different models and cultures to create a foundation for a completely new rural development model in China.

President Botelho was looking forward to gain a closer understanding of China’s rural revitalization strategy and the development of rural areas in China. The trip provided a new perspective to strengthen and deepen the future cooperation between China and Europe.

By the end of the year ELARD will make concrete cooperation proposals to SAFEA/CAIEP to be launched in 2019. These proposals may include expertise exchange, training programmes, Leader pilots, study visits etc.

More info about the next steps, including the upcoming Brussels meeting on 26th November 2018 with deputy minister Zhang Jianguo coming in near future.