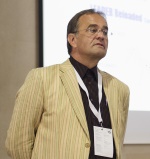 Invited by ELARD to present a keynote paper on LEADER for the international LEADER Reloaded Conference, held last September, in Évora, Portugal, Robert Lukesch, a renowned LEADER evaluator since 1995, wrote a “wide-ranging” and also “remarkable” keynote paper applauded by the attendees and praised by development networks like LDnet-Local Development Network or AEIDL- European Association for Information on Local Development .

Robert Lukesch’s keynote paper for the conference was most enlightening. In a few words, what, in 1991, was “widely considered as a low-end measure with no budgetary or political importance”, and turned out to be a “disruptive institutional innovation”, has been progressively confined to a CLLD/LEADER implementation vanishing in the haze,

Although, “it has to be said that originally, throughout LEADER I and II, the seven principles included ‘Decentralised management and financing’, whereas ‘Networking’ and ‘Cooperation’ had been considered as one. Thus they kept being seven all the time, only that the most essential aspect of ‘Decentralised management and financing’ got out of sight and literally went to the dogs during the first mainstreaming period (2007-2013). Although it has regained attention during the period 2014-2020, I propose to put things right by re-enacting it as the eighth LEADER principle, as was emphasized by Michael Dower in his final remarks during the workshop LEADER Reloaded in Évora on Sept. 28th, 2018”.

This initial roadmap on LEADER ends with a mixed acknowledgement. If, on the one hand, Lukesch admits that “the Articles determining CLLD in the Articles 32-35 of the Common Provisions Regulation 1303/2013 are the most developed and best-thought edition of LEADER rules ever”, on the other hand it is true that local action groups refer to “administrative burden and bureaucratic intricacies which amount to excessive paperwork, time delays and even financial losses, when received funding has been declared ineligible in a subsequent audit and had to be paid back.”

Looking back to the presentation made by both Bernd Schuh and himself for the final conference of the LEADER+ Community Initiative which took place in Evora in 2007, the LEADER evaluator recalled that they had “mentioned five possible pitfalls which might come along with the mainstreaming of LEADER in the RDPs”, namely: “Submission”, “Backstreaming”, “Degeneration”, “Overload” and “Tickover”. According to him, these difficulties “got worse during the first period of mainstreaming in most LEADER areas, and they still persist in the present period”.

Regarding the future and the Draft Regulation for CAP Strategic Plans (1 June 2018), Robert Lukesch points out that the “proposals just wave through what is already going on but do not respond to any of the shortcomings which actually stymies the LEADER implementation. The future separation of Cohesion Policy and CAP Funds makes us doubt whether the CLLD/LEADER approach will actually survive as a relevant method for local development outside rural and possibly fishery areas.”

Before it’s too late, given that “the proposals have still not crystallized into definite Regulations”. “There is time to raise our voice, to intervene, to argue, to come up with better proposals. Why should we just sit there and spectate at the fizzling out of a piece of policy which has brought so much value to our rural areas?”

Indeed, why should we?